2013’s Risk of Rain was a delightful 2D roguelike that grabbed the PC community by storm with its tight controls and addicting gameplay. Fast forward to March 2019 and indie outfit Hopoo Games launched Risk of Rain 2 in to Early Access and has not vacated the Steam top sellers list yet.

This isn’t any old sequel though, Hopoo Games have transformed everything that Risk of Rain was from a 2D to 3D environment with stunning visuals and the same frantic, addictive gameplay loop. Seeing the transformation from a 2D pixel-art style to a vibrant, colourful and popping 3D environment is one of the most exciting directions I have seen a developer take a follow-up to a PC hit. It would have been easy to sit on the success of Risk of Rain and create another great 2D roguelike, but Hopoo Games have come up trumps and their risks have paid off dividends.

Risk of Rain 2 can be played as a solo experience or in co-operative multiplayer with friends or via the built-in matchmaking system, where each player has the opportunity to play as one of several unlockable characters that all possess their own flair, abilities and playstyles. If you enjoy playing as a ranged hero in a MMO and love mobility then the Huntress might just be for you, or perhaps you are really in to Warframe and nothing gets you all hot and bothered like slicing enemies with swords in melee combat – then check out the Mercenary. Personally my favourite is the Commando who is the only playable character when the game is first booted, I am partial to his dash ability that let me quickly maneuver in and out of danger.

Diving in to one of  the three pre-set difficulties on offer, you and your co-operative buddies will set out plowing through hordes of constantly spawning enemies, bombing, shooting and slicing your way through hundreds of flying wisps, teleporting imps, exploding jellyfish and scurrying beetles before you notice the slow, trickling increase of difficulty as time passes. As you all start to worry if the randomly generated items you have been gathering are going to see you through, the difficulty slowly ticks in to ‘HAHAHAHAHA‘ territory as a seemingly infinite amount of enemies surround you and your squad, frantically battling through to find the teleporter to the next area.

Like most other roguelikes being lucky with loot drops on each run is part of the game and different pieces of loot will drastically alter your playstyle. In Risk of Rain 2 disposing of enemies earns a currency that can be spent opening chests, item stations or shrines of chance where they will throw out random items from upon their ivory tower as you scamper to gobble them up. Currency can also be used to power up stationary sentry turrets that aid in battle and will gradually generate that sweet, sweet currency as they devour the incoming horde. Any money that hasn’t been used before activating the teleporter after killing the area boss will be converted in to experience points, levelling up the character for this particular run and making them more powerful.

I encountered a large magnitude of items from a warbanner that automatically dispenses as I level up, creating a bubble that boosted the stats of all players contained within, a primordial cube that sucks in all nearby enemies as they helplessly struggle against a tsunami of area of effect attacks to a humble feather that adds additional jumps to your maneuverability arsenal. Not every item has a chance to spawn on a run as they are locked and can be unlocked by completing in-game achievements which provides an incentive to play out of your comfort zone or try different tactics in a bid to unlock exciting new items that will surely boost survival chances.

Sadly, loot in co-operative multiplayer is not instanced so it is possible to spend hard-earned currency opening a large chest for a not-so-co-operative chum to dash, blink or lunge in and scoop up the item you paid for, even if it doesn’t necessarily help with their build, playstyle or character of choice.  This left me with a overwhelming feeling of frustration and reminded why I would sooner play loot based games with friends than over matchmaking, which is a real shame as Risk of Rain 2 has the potential to be a fantastic multiplayer game for years to come. Even if the loot was instanced for 10-15 seconds or if the game made it possible for me to mark loot as not needed, this would go a huge way in alleviating this problem.

Risk of Rain 2 offers a third way to enjoy the game’s content in the form of a daily run under the Prismatic Trials moniker which features an identical game world for every player partaking in a run, giving equal chance to everyone.  These are timed runs and the top 10% will be gifted in-game rewards. Although, it is not yet known what these rewards will be. I found myself ransacking my way through a Prismatic Trial more than once as it offered a fun challenge that was different enough from the rest of the game to keep me interested for more than one playthrough.

There are many secrets hidden within Risk of Rain 2 that made me wonder what else I have missed. After accidentally falling from a cliff edge and out of the map boundaries, I discovered a small alcove etched in to the side of a mountain and by carefully landing on a miniscule ledge I uncovered a small, dimly lit cavern that rewarded me with a in-game achievement that then allowed a specific item the chance to spawn in any future runs. Likewise, there is a random chance of a blue portal spawning upon defeating an area boss, a blue-glowing area with a otherworldly shopkeeper lie in wait on the other side. I hope there is more to explore and discover as I continue playing.

Risk of Rain 2 is an excitingly fresh take on the roguelike genre and is quite simply one of the best games released in 2019 so far, despite still being in early access. Reasonably, that leads me to believe far more content is coming including Artifacts, which are mentioned at the game menu, which are game modifiers that can be found in the world.

The gameplay loop of discovery, overcoming a variety of enemies with a ever-increasing difficulty while scavenging for loot, discovering healing or offensive drones and taking down bosses instantly hooked me and got me in to that one more run loop. The random nature of the huge swathe of spawnable items constantly alters the playing field and allows for some neat tactical changes on the fly.

I am in love with the vibrant art style and sci-fi soundtrack that any 1950’s classic sci-fi movie would be proud of.  Sadly, Risk of Rain 2 is devoid of any overall profile progression.  It would have been nice to see a total amount of enemies killed, damage done, items gathered, money spent and a number of other useless stats.  I am a sucker for stats and it would be great to show that off to my co-op buddies.

Risk of Rain 2 is not without its issues as loot ninjas swoop in to take non-instanced loot that others have spent in-game currency on as well as difficulties locating the end-of-area teleporter which was half spawning inside rocks or structures or in near-impossible to see locations – running around for 20-30 minutes solely searching for a teleporter is not fun. Luckily, this happened so few times that it never turned me off from launching another run. 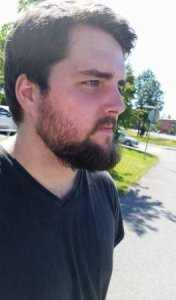 Welcome to AndrewsBase, think of it like a sandwich; consider tech and games the bread and the filling is everything in-between.